I’m currently reading Ted Albrecht’s new English translation of Beethoven’s conversation books. These were small blank pocket pamphlets with cardboard covers, usually of about 70 to 90 pages, in which Beethoven’s visitors and companions would write with pencil when he was unable to hear them, usually in public. In private, Beethoven usually still had enough hearing to be able to understand those who talked loudly. Beethoven himself also occasionally wrote in these books, either to answer when he did not want to be heard, or sometimes as memoranda to himself. The earliest surviving book dates from 1818, and they were used up until shortly before Beethoven’s death. These books give a window like no other into Beethoven’s daily life, though the musical content is not always very large.

I’ve finally caught up in volume 2 of these books (specifically conversation book #13, covering May 1 through May 10, 1820) to the date 200 years ago. So as it’s interesting (or the books survive) I’ll note what Beethoven was up to 200 years ago.

On May 3, 1820, Beethoven was getting ready for his move to the country in the village of Mödling, about 14 km sourth of Vienna, where he had spent the summer of 1819 as well. Much of his day was consumed with these preparations, and the entries are unusually long. Today’s entries cover leaves 8r through 19v of Conversation Book 13. 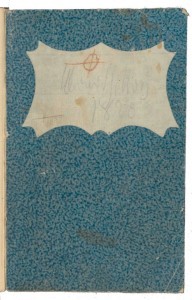 Beethoven’s general habit was to arise around 5 AM and work on his compositions; thus there are seldom any entries for the mornings and we must assume that he was composing during that time. However, May 3 was a little unusual.

That morning, Beethoven was visited by Franz Xaver Gebauer, who conducted a weekly series of “Concerts spirituels” in Vienna. Gebauer asked to borrow the parts for Beethoven’s Mass in C, op.86, for the concert scheduled for 4 PM on Friday May 5. Beethoven consented, even though he had previously had bad experiences getting back parts that were no longer complete. Gebauer asked Beethoven to join him for coffee at the Golden Crown coffeehouse, but Beethoven apparently declined.

Instead, he made a shopping list of items he would need for Mödling, including a straw mattress, utensils and bed linens. In the middle of his shopping list, he stopped to sketch “Ex Maria Virgine” from the Credo of the Missa Solemnis, which was already overdue for the Archduke Rudolph. Beethoven also made a reminder note to restring his violins.

Sketch for “ex Maria Virgine” from Credo of the Missa Solemnis, leaf 9r of Conversation Book 13

Beethoven then went around noon to visit his lawyer, Johann Baptist Bach, in the company of Franz Oliva. Oliva was a bookkeeper who was Beethoven’s friend and who assisted him in financial matters. Since the Court of Appeals had in April finally awarded Beethoven nephew Karl’s guardianship, that meant he was now entitled to receive the pension for Karl’s support that Karl’s mother Johanna had previously received. She had last collected it in October 1819. Bach tells Beethoven what he needs to do in order to collect the pension, which includes a verification from a priest that Johanna is still alive. [Karl is currently at the Blöchlinger Institute for his education. Visiting days are Thursdays and Sundays, generally.]

Beethoven regularly had trouble with housekeepers, and his current one seems to be no exception. She announced at Frau Paumgarten’s boarding house where Oliva ate lunch that she will not go into the country with Beethoven; she has taken another position. Beethoven is angry that she has given him no notice. However, apparently she did in fact give him written notice but in a foul mood he tore it up unread and threw it back at her. She showed the fragments to Oliva.Thus in addition to all his other preparations Beethoven will need to find a new housekeeper.

Arrangements are made for Beethoven to have a bath tomorrow evening at 6 PM. He is unhappy that Mozart’s son and Johann Nepomuk Hummel, both of whom are visiting Vienna, have failed to visit him or even contact him.

Later in the afternoon, Beethoven and Oliva visit a mattress shop, and discuss the merits of a new mattress cover versus just mending the old one (later entries show Beethoven chose mending). They then visit the Treasury Receipts office to deal with the pension, and then to a linen shop for the bed linens. The pair then visits the local church to obtain a verification from the priest that Johanna van Beethoven is still alive. The priest is not, however, available then, since the next few days include further efforts to get his signature.

RSS Feed from The Unheard Blog