The Last Rose of Summer, Variations op. 105 nr. 4, for Piano and Violin (1818)
Download mp3
Performer: Rachel Barton Pine
Length: 3:29
Beethoven composed arrangements of a great many English, Irish, Scottish and Welsh folksongs for publisher George Thomson. Although he politely expressed the greatest admiration for Beethoven and his talents, in a letter of June 22, 1818 Thomson lamented that his arrangements "are much too difficult....My songs with your ritornellos and accompaniments do not sell!" But Thomson did not give up hope. Instead, he suggested that arranging some of the songs for flute or violin with piano as sets of variations might be more appealing. But Thomson again emphasized that they needed to be easy. The results of this commission are presently collected as opus 105 and opus 107, even though Beethoven again disregarded this admonition to keep the pieces easy to play. 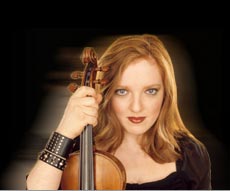